This is the blog that I started for friends and family to follow my Long Distance Riding preparation and competition in the inaugural Iron Butt 5000, a 5 day 5000 mile motorcycle rally. In May 2011, Mike Kneebone for the IBA announced there would not be an IB5000 in 2012, but instead that the IBA and Team Strange would be sponsoring the But Lite 6IX in 2012. So that makes this blog a bit of Long Distance History, so I've decided to leave it as it is for historical purposes. I will create other blogs as I have new adventures and rally competitions.

When I first decided to apply for the IB5000 I had thought that I wouldn’t make any changes to my bike, as I have improved it for 3 years now and I am very happy with it. I talked with Amy about this and others, and how in all my readings, one of the biggest mistakes other riders make is to get into the IBR and then go crazy with changes and additions to their bikes. This, in many cases, ends up adding issues and problems which have a variety of reasons and excuses. I figured my bike is just fine, after all it’s a Goldwing, and I have a very good routine for being efficient. However, I still wanted to be sure, so I asked and talked with those that have been there done that. The one farkle I don’t have is an Auxiliary Fuel Tank, which was unanimously recommended by IBR/LDR veterans. I decided that having some of the most experienced riders tell me this is a must have, I really had to go back and make a change to my bike.

Riding a Goldwing is a great advantage because it has been around for awhile, has excellent reliability, and almost every change or farkle has been added to one or worked out by others. There are 4 proven Aux Tank set-ups, each with pluses and minuses. They are as follows:

So, if money was no option I would go with a Custom Fuel Tank for the passenger seat because these are ordered and arrive ready to install. Since cost is a factor for me I had 2 options, either a commercial fuel cell mounted on the passenger seat or one mounted in the trunk. The trunk has some advantages I like, but after talking with others about it, I really didn’t want to lose my trunk space as it is my main 'working space' in a rally. I also recognized that a Jaz Tank was a problem for my trunk access and that most LD Riders have to remove the passenger backrest pad to allow the trunk to open fully. This really bothered me and was something I wanted to avoid. I then realized that a 4 Gallon Tour Tank with an 8” diameter could be mounted low enough on my passenger seat to allow the trunk to fully open with little to no interference. The only problem I saw was that I had never seen this set-up before so I would be charting new territory in my mounting approach.

With a plan in place, it was time to get serious. I used all my Christmas money to fund this addition and my wonderful wife took care of ordering everything for me to put under the Christmas Tree. I want to add, I wasn’t allowed to open it till Christmas; but after all the kids' gifts were done and the normal gifts exchanged, I did open it, and it brought a huge grin to my face. I immediately went outside and placed the tank on my passenger seat using towels to support it in the location I planned to mount it. 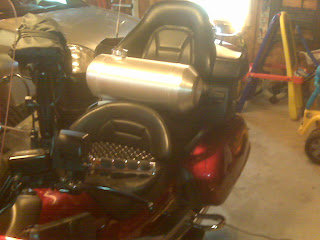 It was so cool-looking; I dragged Amy outside to admire it. This was, of course, lost on her, as she said it looked like I had a bomb strapped to my bike now. It was therefore nicknamed the "H-Bomb Tank." I tested out the position and felt that I had a very good solution; the tank was still allowing full trunk access and looked like it would provide a good backrest with some padding, which was something I have been thinking of adding.

After spending some time in the garage with cardboard and sheet metal I came up with a mounting solution that seemed pretty simple. I could have made a platform to mount the tank on, using some steel plate; this would have moved the tank up higher and caused interference with the trunk, however, and also, positioned the tank uncomfortably higher on my back. Using a low position had the advantage that the tank was actually in the exact spot to provide lumbar support similar to a car seat with the round part perfectly aligned with the small of my back. So I went with aluminum angle brackets, flat stock, cut and bolted together. 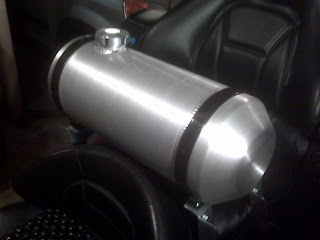 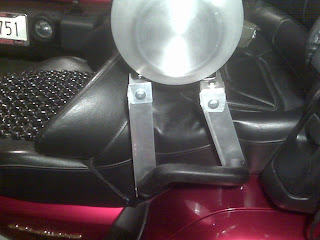 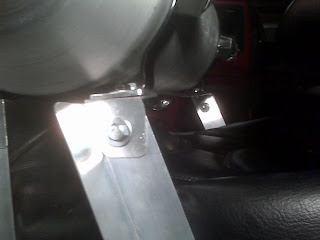 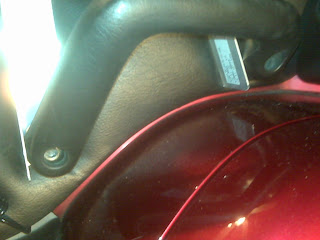 The mount is very solid and overall I’m happy with it right now. However I have been checking the rules and IBA forum on the inspection criteria for Aux Tanks. I have zero movement front to back, as designed, since I’m planning to lean into the tank while riding, but I do have movement left to right, because of some seat foam give. It’s not a lot of movement and if I grad the tank and move it side to side I can easily move the bike back and forth. However I am going to make some further changes by increasing the attachment angles to allow 2 bolts on each leg and adding an additional cross brace on the aft mount to hopefully reduce the racking. I still need to plumb the lines to the tank, but this is a proven approach from others so I’m not as worried about it right now and want to get the mount finished first. Also the snow and ice means a test ride is out for awhile too. Stay tuned for the next update…
Posted by John Tubb at 10:04 AM

John Tubb
Madison, AL, United States
So I have set up a few different blogs to document my motorcycle trips, rally adventures and even my unusual adventures. I have a need to ride and I have a need to share my trips and times with my family and friends. Follow along any of my blogs and feel free to drop me a line.